This article in the New York Times describing a “tipping point” in the effect of gas prices on the economy is a good example of bad use of the term tipping point.  Unfortunately, the term has become so popularized that it has lost a lot of its meaning (Scott Page and I try to resurrect it in a recent paper that’s currently under review).  The gist of the article is a simple model that goes like this: 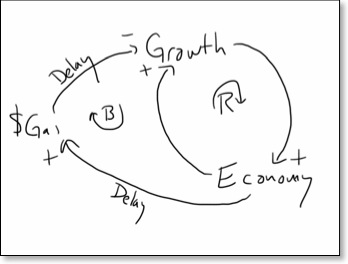 From a system dynamics perspective there are two feedback loops in this model: the reinforcing loop of economic growth and the balancing loop that goes through gas prices.  Since the links between the economy and gas prices and gas prices and growth both have delays in them, this structure leads to oscillation in both gas prices and the economy.  The economy grows, leading to more growth.  Eventually gas prices catch up and start to slow economic growth until it begins to decline.  At this point, growth is negative leading the economy to shrink, leading to more negative growth as the reinforcing feedback works in the opposite direction.  Eventually gas prices fall low enough to start the recovery, and the oscillation repeats.  The article suggests that we may be reaching the top of one of the peaks in the economy, at which the rise in gas prices causes growth to go from positive to negative.  But this is not a tipping point.  At a tipping point, a small change causes a big change.  In this case, if we believe this model and that we’re at the crest of one of these cycles, a small increase in gas prices causes a small decrease in the growth rate.  It just happens to go from very slightly positive to very slightly negative, but this is still a small change — not a tip.